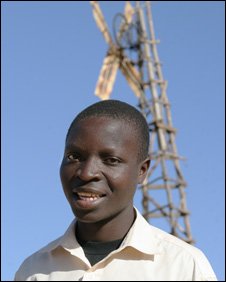 In the African country of Milawi,  teenager William Kamkwamba transformed his village by building an electric windmill out of junk.

One day he picked up a tattered textbook and saw a picture of a windmill.

“I was very interested when I saw the windmill could make electricity and pump water. I thought that maybe I should build one for myself’, said William.

The finished product was a 5 metre tall windmill linked up to a car light bulb. As the blades began to spin in the breeze, the bulb flickered to life and a crowd of astonished onlookers went wild.

“Over the weeks,” said William, “my scrap pieces kept revealing themselves like a magic puzzle. “Many, including my mother, thought I was going crazy,” he recalls. “They had never seen a windmill before.”

Against all odds, William’s junk windmill worked. It powered light bulbs in his family’s home and later was able to charge mobile phones.

“I was encouraged by the picture which I saw in the science book. I was saying to myself, ‘It means that somebody somewhere else built this thing.”